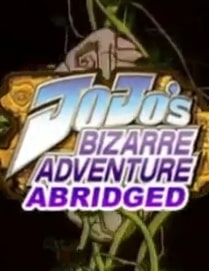 Jojo’s Bizarre Adventure TAS is a parody series of the two JoJo's Bizarre Adventure OVAs, and the abridging debut of Antfish. With the OVAs being an adaptation of the Stardust Crusaders arc, so is the abridged series. It is divided into two seasons that each abridges one OVA and covers one half of Stardust Crusaders; the first season abridges the second OVA and covers the first half, while the second season does vice versa. With its popularity catching the attention of Team Four Star - who initially guest starred in its third episode - it was the start of Antfish's close affiliation with the group. A prequel was created by Antfish in 2013, titled JoJo's Bizarre Adventure Abridged: Phantom Blood.