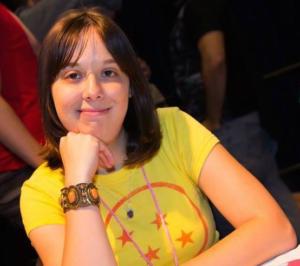 Megami33, or Corinne Sudberg, is a voice actress, abridger and artist. She began abridging in 2007 during her college freshman year, inspired by Little Kuriboh's Yu-Gi-Oh! The Abridged Series. She got together with a group of friends to create Sailor Moon Abridged, for which she was the director, co-writer, editor, mixer and voice actress for its main character. The following year she became a member of Team Four Star, voicing Bulma along with some other characters in Dragon Ball Z Abridged. Since then she has done voice work for a number of the group's productions along with those of other creators such as Something Witty Entertainment and The Schmuck Squad, as well as machinimas such as Tigura21's Smash King and Aphmau's Minecraft Diaries.